My one Thanksgiving wish: Defense shut down dem Cowgirls!! (1 Viewer)

Offline
Some of you may have already predicted this but ever since Wade Phillips got fired and Jason Garrett has taken over everyone's talking about how the Cowboys are different. Sure they've won two in a row and are playing better but mind you that was against a weaker Giants team that played them a few weeks before and a Lions team that gave them all they could handle and were benefited from a few questionable calls to say the least. I just want the Saints defense to get after Kitna and expose that O Line. Sure would be nice for Will Smith to dominate much like Ware did last year. Jabari Greer, make up for what's in your standards a very poor effort against the Seahawks and play lights out....Tracy Porter, get fat on turkey day with a pick 6...needless to say I'm pumped for this game...WHO DAT!!!!!!!!

Offline
I'm with ya BCK30. I hope our defense and offense dominate the Cowboys today. I really believe and have faith that the Saints will be victorious today. 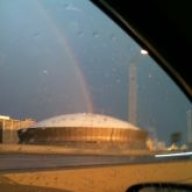 Offline
Pass dat around... I'll have some of that wish as well!

Offline
My wish is for no Saint turnovers.
Show hidden low quality content