Jerry Rice has given Isaac Bruce the go-ahead to wear No. 80 for the 49ers.

"I have always respected Isaac Bruce," Rice said. Somehow the number was never retired, but no 49er has worn it since Rice's last year in San Francisco (2000). Bruce, who ranks third all-time in receiving yards behind only Rice and Tim Brown, has worn the No. 80 all 14 seasons he's been in the league.
Source: Santa Rosa Press Democrat
Related: Isaac Bruce

Offline
Well, could be any more of a stand up guy?

I didn't know that. Interesting.

wow, had no clue

i wonder if washington gets to retire #21?

d3vanj said:
wow, had no clue

i wonder if washington gets to retire #21?
Click to expand...

I think thats what most teams will do, just unofficially retire numbers. It would take a real ******* player or a clueless coach (i.e. Spurrier) not to respect that. 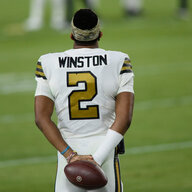 Offline
Not a surprise that Rice gave the go ahead to isaac Bruce to wear 80. If you remember correctly, Steve Largent let Rice wear 80 on the Seahawks.

llamakc said:
I didn't know that. Interesting.
Click to expand...

I remember hearing about it a while back, maybe at the end of the Dome Patrol era. I think the NFL started to get worried about teams retiring too many numbers and limiting what numbers future players could have, at least that was the official reason.

Offline
Yeah like said above, NFL only has a select few numbers designated for positions. Wrs need to be 10 - 19 or 80 - 89 So thats 20 numbers. An nfl roster needs 53 men on it alone, and in say 10 - 15 years expecially on a team like say the Colts, when say Marvin Harrison, Reggie Wayne (and whoever else the draft and keep along with Peyton) If all these guy rightfully get thier numbers retired, well its down to 18 numbers avaible etc. So rather than start getting into the 3 digit numbers, or changing there current format and let any play wear any number (which I don't see the big deal with anyways). They just said ex-nay on the retiring numbers instead.

Offline
Im glad they quit retiring numbers, I think its a little overboard. Now, if they can ban WRs with teen numbers, id be more happy. leave that crap in college.

Offline
The thought that a lot of frisco fans might be upset about this makes me giggle.

Saint77 said:
Im glad they quit retiring numbers, I think its a little overboard. Now, if they can ban WRs with teen numbers, id be more happy. leave that crap in college.
Click to expand...

I see your point, but it doesn't bother me. I kinda find it a bit refreshing.

Offline
I would think they'd make an exception for someone like Jerry Rice. JMO

Offline
Marshall Faulk jersey got retired last season. So, when did the NFL tell teams to stop retiring jersey numbers?

Offline
Brett Favre's will have to be retired or the GB fans will start boycotting the league or something.

The league put out a memo about 10-15 years ago about unretiring numbers, because if teams like the Cowboys, Raiders and Steelers all retired their great players numbers, they'd run out...

However, the league allow teams to make certain number "unavailable"... but if all other numbers were taken (i.e. a linebacker and numbers 50-59 and 90-99 are taken), then they have to allow a "unavailable" number to be used.

It's one of the reasons receivers were allowed to use numbers in the teens again.

But it is entirely up to the team to decide which numbers will be unavailable -for the most part they will be quarterbacks because there isn't a lot of demand for those (i.e. Marino's #13, Elway's #7, etc.)
Show hidden low quality content