The team announced on Wednesday it had signed Kai Forbath to replace Blair Walsh, whom the Vikings released Tuesday after his fourth missed extra point of the season. Forbath, who kicked for the Washington Redskins from 2012-15 and spent part of the 2015 season with the New Orleans Saints, and was one of six kickers to try out for the Vikings last week, after Walsh missed an extra point and had a field goal blocked against the Detroit Lions on Nov. 6.
Click to expand...

For as bad as our kicking game has been it is very interesting that the NFL is littered with more of our ex-kickers than any other teams.

I think he might have been reaching for K Shane Graham, but yea Gano never kicked a Saints ball. 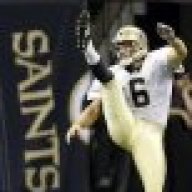 Offline
Good for him. I wish him all the best.

It speaks to coaching that we can't keep a kicker mentally healthy for longer than a couple months.
Show hidden low quality content