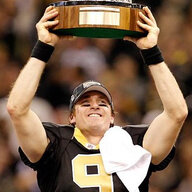 Offline
Sticky Post
With all the concerns on the SSF about players' statements and actions, I thought it would be fun to pile some hate on the new kid in the NFCS, Tom Brady.

He is openly defying the NFL, NFLPA, and every public health expert in the US by continuing to put his family and his teammates at risk by practicing. Today he quoted FDR on IG "Only thing we have to fear, is fear itself," ignoring the 121,809 deaths (as of today) of US citizens. Brady may be more obsessed than even Jordan as now he is putting the health of others over his need to succeed at sports and prove he can win without Belacheat.

I've always hated the "pretty boy" because he gets SO much credit for SB wins that were supported by very good defensive teams. (I'm not saying he's not a great QB). The primetime game when the Saints crushed the Pats at the Dome is my favorite Saints' regular season game of all time.

So let's hear it...what do you think about Brady?
Click to expand...

Noble Saint said:
I think he is a grown man and he shouldn’t care what we think.
Click to expand...

It would really be nice if more people think like that. I’ve always thought that what I do is nobody’s business but mine. I also don’t want to stick my nose into anyone else‘s business and won’t unless I’m asked to. If Brady wants to go out and practice with some of his teammates then do it and the same goes for Drew.
Show hidden low quality content