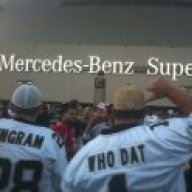 The Rams’ much-ballyhooed prime-time debut in their return to L.A. wasn’t much of a local story, apparently. The Week 1 Monday night game against the San Francisco 49ers, their old rivals, drew paltry ratings. Only 16.1 percent of homes in the Los Angeles market were tuned to the game, even though it was available on both cable (ESPN) and free TV (the local ABC affiliate) in the L.A. market, according to Nielsen ratings
Click to expand...


Im sure the NFL doesn't care for this type of news after the much hype of the Rams returning to LA.

I think a lot can be said about small market teams that bleed their teams colors. I hope the NFL learns this well before our next contract with the super dome.

Offline
More egg on the face of the NFL's fearless leader. Prime example of; if you don't know where you're going, any road will take you there.
Thanx for the post.

Offline
Maybe if the Rams resign Jeff Fisher, the crowds will come running.

Online
Well, they've sold 90,000 season tickets. It's far from a failure. They seem to me to be doing the right things. Their training camps were pretty packed too.

I think it'll turn out good for them.


Sent from my SAMSUNG-SM-G891A using Tapatalk

Offline
I can't imagine that LA has a lack of football fans. Probably has more to do with the team being abhorrent than anything else.

Offline
It didn't help, getting depantsed on National TV to the tune of 28-0. I was torn because of the old NFCW hate that I still have. I HATE the 49ers and the Rams. But I wanted them to at least beat each other up.

This. You can play percentages all day long. But when you look at the real numbers, even a percent or two less in LA is a lot more than that higher percent in SL.

alohawhodat said:
I can't imagine that LA has a lack of football fans. Probably has more to do with the team being abhorrent than anything else.
Click to expand...

They may also have a higher percentage of cable such subscribers in St. Louis also.

Offline
The reason I can't believe football will work in LA is, having lived in SoCal for almost a decade you come to find out people there come from all over, and as such come to SoCal as fans of teams not in LA. The only reason the Lakers (and now the Clippers) are big is because people love a winner.

Offline
There's more to do in LA then St. Louis


Sent from my iPhone 6Plus using Tapatalk

True. And in terms of actual house hold numbers,

You always see the above and the other classic, "xx is 5 times more likely than xx to so and so". These types of stats should never be used in isolation. By itself it basically tells you nothing.

Offline
I'm not looking at a population chart or anything, but I'd bet 15% of Los Angeles means more people than 100% of St. Louis.

Offline
Anything that hurts the image of the NFL and Roger Goodell is fine by me.
Show hidden low quality content