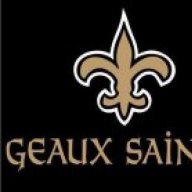 Offline
It's being widely reported on the local sports programs (as well as on NFL Network last night) that the deal is all but signed for Butch Davis to replace John Bunting at North Carolina.

Personally, I liked Bunting as a position coach when he was with the Saints. I would love for him to return if there were a place for him on Payton's staff.

P.S. Isn't it strange how that baby blue looks so much better on basketball jerseys than football jerseys?

Offline
Its been a done deal for a couple of days.
Show hidden low quality content