Offline
The debut of the great Aaron Brooks.

<<< file corrupted, fixing, should be done by Saturday >>>

Fixed...2 files for each half now. 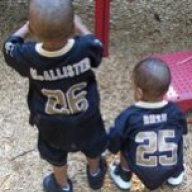 Offline
Aww man I've been looking for this one. I just knew we were gonna be screwed once blake went down. Hope the torrent is still healthy when i get home

Offline
I downloaded the game and only get the 2nd half.

And also no volume expect for the final couple of plays of the game which was also off has it was for the start of the 2nd half so it didn't match the game. I downloaded it on vuze. I first did it Windows Media Player but get that all codec thing.

Did I do something wrong.
OP

Offline
I just checked the file i'm seeding and you are correct, its screwed up. I'll have to re-rip it and re-encode it. I'll let you know when its done.

Offline
Fixed...2 files for each half now.