Today is New Coach Eve. It has occurred many times before in New Orleans Saints history - too many times. To some, it is the most exciting night for Saints fans. It is the night before the debut of a new head coach and the anticipation of countless victories to follow. It is not an annual event like Christmas Eve or New Year’s Eve, but it is every bit as exciting, maybe even more so in light of last year’s tragedies.

The anticipation for this season is at a fever pitch because of all the changes that have happened since this time last year. After Hurricane Katrina destroyed much of the Gulf South, despair was at an all-time high for many of the residents. One would think the last thing they would have been worried about was the fate of their New Orleans Saints. But the Saints in fact became a rallying point for the tattered fan base. Although just a few Saints games were played in Louisiana, the fact that they were played here at all was significant.

In the wake of Katrina and the 3-13 season that she contributed to, Sean Payton was hired to be the new head coach. He seems to bring a no nonsense approach that has been welcomed by the fans and hopefully the players as well. The fact that he has released or traded away half of last year’s team shows the he means business. The status quo is not going to cut it with him.

Along with the new head coach comes an entire new staff of assistants as well. This only adds to the anticipation factor for the fans. Throw in newcomers Drew Brees and Reggie Bush and the pot really begins to simmer. The fact that both of these young men have embraced New Orleans as opposed to turn away from the myriad of problems has made many take notice. Add to that, a recommitted Joe Horn and Deuce McAllister and the pot of anticipation is at a roaring boil.

Team owner Tom Benson announced this week that season ticket sales have exceeded 65,000. How can this be? Much of the fan base of the New Orleans Saints has had their houses flooded or completely destroyed. Still in all, many have committed to supporting their team by purchasing season tickets. That truly shows the passion of Saints fans. During these troubled times, they have decided to hitch themselves to the 2006 New Orleans Saints bandwagon.

So tomorrow at noon, many Saints fans will put aside their hammers and lay down their tool belts and take three or so hours off for a little escape from their harsh reality. They may gather with friends and family or adjourn to their FEMA trailers, but they will be watching their beloved Saints. The Saints have always represented hope. But this time, we all know the next New Coach Eve is at least twenty years and numerous Super Bowl victories down the road. 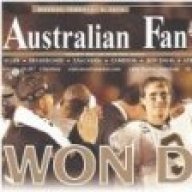 Anticipate no more. Sean and the team he built have taken the SUPERBOWL on their first visit to the biggest game.

This is the first topic that I could access on the board.
Show hidden low quality content