NFL Calendar 2019-2020 season
February 4: Waiver system begins for 2019.
February 12: Beginning at 12 noon, New York time, NFL clubs may begin to sign players whose 2019 CFL contracts have expired. Players under contract to a CFL club for the 2019 season or who have an option for the 2019 season are not eligible to be signed.
February 19: First day for clubs to designate Franchise or Transition Players.
February 26-March 4: NFL Combine Timing and Testing, Lucas Oil Stadium, Indianapolis, Indiana.
March 5: Prior to 4:00 p.m., deadline for clubs to designate Franchise or Transition Players.
March 11-13: Clubs are permitted to contact, and enter into contract negotiations with, the certified agents of players who will become Unrestricted Free Agents upon the expiration of their 2018 player contracts at 4:00 p.m., New York time, on March 14. However, a contract cannot be executed with a new club until 4:00 p.m., New York time, on March 14.
Prior to 4:00 p.m., New York time, clubs must exercise options for 2019 on all players who have option clauses in their 2018 contracts.
The 2019 league year and free agency period begin at 4:00 p.m., New York time.
March 13: The first day of the 2019 league year will end at 11:59:59 p.m., New York time, on March 13. Clubs will receive a personnel notice that will include all transactions submitted to the league office during the period between 4:00 p.m., New York time, and 11:59:59 p.m., New York time, on March 13.
March 24-27: Annual League Meeting, Phoenix, Arizona.
April 1: Clubs that hired a new head coach after the end of the 2018 regular season may begin offseason workout programs.
April 15: Clubs with returning head coaches may begin offseason workout programs.
April 19: Deadline for Restricted Free Agents to sign Offer Sheets.
April 19: Deadline for prior club to exercise Right of First Refusal to Restricted Free Agents.
April 25-27 NFL Draft 2019 - Thursday through Saturday - Nashville, Tennessee.
May 20-22: Spring League Meeting, Key Biscayne, Florida.
June 3: Deadline for prior club to send June 1 Tender to its unsigned Restricted Free Agents who received a qualifying offer for a right of first refusal only in order for such player to be subject to the CBA June 15 Tender.
June 15: Deadline for club to withdraw qualifying offer to Restricted Free Agents and still retain exclusive negotiating rights by substituting "June 15 Tender" of one-year contract at 110 percent of the player's prior-year Paragraph 5 Salary (with all other terms of his prior-year contract carried forward unchanged).
Late June: Rookie Transition Program.
July 15: At 4:00 p.m. ET, deadline for any club that designated a Franchise Player to sign such player to a multi-year contract or extension. After this date, the player may sign only a one-year contract with his prior club for the 2019 season, and such contract cannot be extended until after the club's last regular season game.
Mid July: Training Camp.
August 1: NFL Hall of Fame game, Hall of Fame Stadium, Canton, Ohio.
August 1-4: Hall of Fame Weekend, Canton, OH.
September 1: Prior to 4:00 p.m., New York time, clubs must reduce rosters to a maximum of 53 players on the Active/Inactive List.
September 2: Claiming period for players placed on waivers at the final roster reduction will expire at 12 noon, New York time.
September 5, 8-9: Opening Week of 2019 NFL regular season. 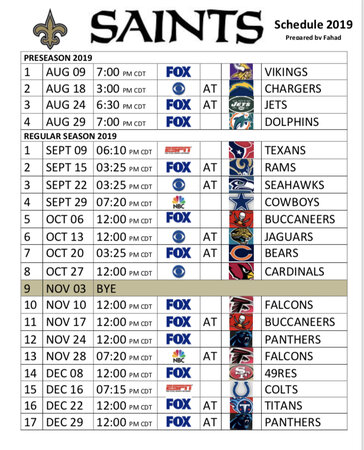 ***Thread Closed***
Credit:
I always use many NFL news media like NFL, ESPN, FOX, WWL, NOLA, Rotoworld, NBC Sports, SR and many more. I always search for saints news all around to put the best possible and most accurate & updated news for all the saints fans and SR.

Please if you have any comments, correction or suggestion to improve, please feel free to contact me.

Copyright 2019
All rights reserved. Any redistribution or reproduction of part or all of the contents in any form is prohibited without my permission.

Note:
It took me days suffering and feeling bad after what happened with the no-call in the NFC Championship game, but I decided to move on knowing that I love the Saints and will continue loving them.

I wish all the best for our team in the upcoming season.
Please Rate the Thread for future evaluation purpose and let me know your feedback.
Thanks you for reading the thread and looking forward to serve you.
Thread Season #12um

Online
That was a lot of work (blood, sweat & tears): Thanks; great stuff !

ndcc said:
That was a lot of work (blood, sweat & tears): Thanks; great stuff !

fahad said:
You are most welcome. I hope you guys find it useful.
Click to expand...

The status of the UFA's on your list needs to be updated (obviously). However, this reminder of our draft positions... is quite useful!

BTW: Will we have any compensatory picks?

fahad said:
You are most welcome. I hope you guys find it useful.
Click to expand...

my annual vote for thread of the year
OP
OP

ndcc said:
The status of the UFA's on your list needs to be updated (obviously). However, this reminder of our draft positions... is quite useful!

BTW: Will we have any compensatory picks?

Updated. Thanks for your feedback.
OP
OP

Offline
Crawley is back for a tender
OP
OP

wnelson said:
Crawley is back for a tender
Click to expand...

Thanks for your feedback , He is expected to sign. I will update once he officially signs his tender.
OP
OP