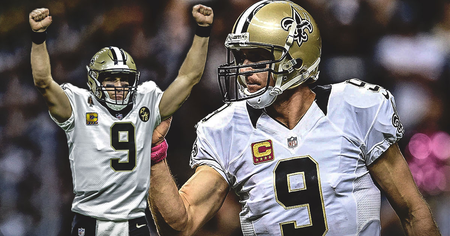 There’s arguably a three-player race for the NFL’s MVP award at the end of 2018, but the New Orleans Saints’ Drew Brees should be the recipient. At some point in the not-so-distant future, fans are going to look back at the Saints quarterback and consider the eventual Hall of Famer one of the greatest and most underrated signal-callers of all time.

And it looks as if he’s fighting that stigma again in 2018.

The emergence of Kansas City Chiefs quarterback Patrick Mahomes has been a major factor in why Brees may not win the NFL MVP award when the regular season draws to a close. Mahomes has been electrifying, for sure. There’s no questioning that. And one could again tack on how Los Angeles Rams running back Todd Gurley is just as deserving of the accolade after his impressive efforts this year. ...

But Brees deserves it. And it’s not just because of a proverbial “lifetime achievement” award given towards the tail end of his remarkable career.

Let’s face it, Brees is playing at an All-Pro level at 39 years old. He’ll turn 40 years old when the Saints are pushing for yet another deep postseason run this January. And after helping knock off New Orleans’ division rivals, the Atlanta Falcons, by a score of 31-17 in Week 12 on Thursday Night Football, it’s becoming even more apparent the veteran deserves to be named league’s best once Week 17 is in the books.

Here are three reasons why. ...