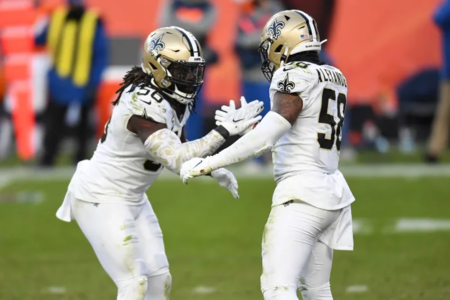 New Orleans Saints (9-2) controls the NFC playoff race after their defense held a hapless Denver Broncos (4-7) offense to 3 points on Sunday, winning 31-3. The complementary styles of linebackers Demario Davis and Kwon Alexander have been key factors in the Saints' last two routs of the Falcons and Broncos. Since Alexander's insertion into the starting lineup over Alex Anzalone, the players have combined for 22 tackles, 1 sack, 1 fumble recovery, 2 passes defended, 2 quarterback hits, and 1 thrown for a loss in those two games. They have also affected the opposing offensive playcalling because of their sideline-to-sideline speed, pressures, tackling, and pass coverage skills.

Defensive ends Cam Jordan, Trey Hendrickson, and Marcus Davenport, along with defensive tackles David Onyemata, and Malcom Brown are notable defensive linemen contributing to New Orleans defensive success in their eight-game winning streak. We should also mention the improved play of the defensive secondary, especially safety Malcolm Jenkins and defensive back Chauncey Gardner-Johnson, over the past several weeks has aided in the Saints' rise to the top of the NFC playoff standings. ...