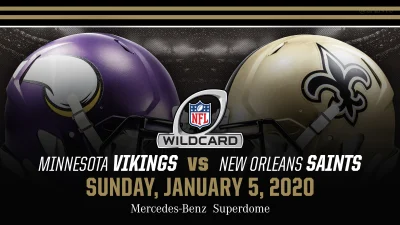 The New Orleans Saints needed to get some help from either the Detroit Lions or Seattle Seahawks on Sunday, Dec. 29 to secure a top two seed in the NFC playoffs and a coveted first-round bye.

They didn't get it.

As a result the Saints, 13-3 for the second consecutive season and champions of the NFC South for a third straight season, will be the No. 3 seed and host a Wild Card game vs. the sixth-seeded Minnesota Vikings (10-6). The game be at 12:05 p.m. Sunday, Jan. 5 at the Mercedes-Benz Superdome. The game will be broadcast by Fox.