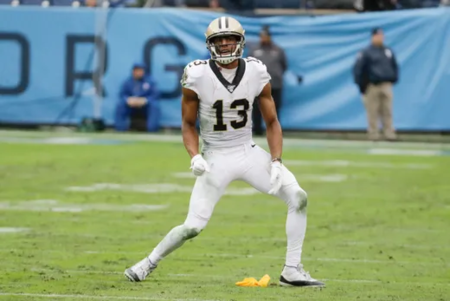 Nashville, Tenn. - The New Orleans Saints came away with a hard-fought 38-28 victory over the Tennessee Titans on Sunday, Dec. 22 at Nissan Stadium.

The victory improved the NFC South champ's record to 12-3, 7-1 on the road, and increased their winning streak against AFC opponents to 11 games. The Saints remain in the mix for a top two seed in the NFC playoffs and the bye week that comes with it.

Saints receiver Michael Thomas continued his assault on the league record books - and opposing teams - as he set two NFL records. The fourth-year receiver set the NFL's single-season receptions record with his 11th reception, a 13-yard catch with 3:06 to play. Thomas scored later in the drive on a 2-yard touchdown pass from quarterback Drew Brees to give the Saints a 38-28 lead with 2:10 to play and move his season total to 145 catches, two more than Marvin Harrison's old mark. ...