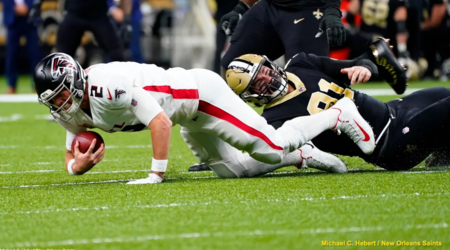 "Just executing the game plan," Onyemata said. "That's how I see it."

The Saints, 8-2 entering Sunday's game against the Broncos (4-6) at Empower Stadium at Mile High in Denver, have benefited from loads of it provided especially by the defensive line this season.

Sacks are the glamour stat, not always indicative of overall effectiveness. But that doesn't make it any less impressive for the Saints, whose defensive linemen have supplied 25 of the team's 32 sacks, led by defensive ends Trey Hendrickson (career high and league-leading 9.5) and Cam Jordan (5.5), and Onyemata (5).

New Orleans hasn't had three defensive linemen with at least five sacks in the same season since 2012, when Jordan (eight), the late Will Smith (six) and Junior Galette (five) managed the feat. ...