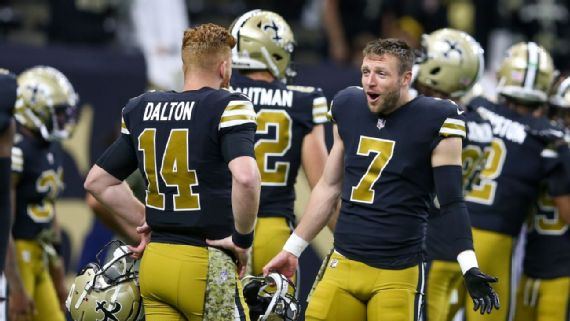 What the New Orleans Saints offense had been giving opposing defenses in moderation, it gave to the Rams a bit more liberally in a 27-20 victory Sunday.

Namely, the Saints unleased upon Los Angeles the kind of two-quarterback approach that the Rams likely knew was coming, but possibly weren't prepared for in frequency. And, perhaps, it's an approach that could be taken again when New Orleans (4-7) faces San Francisco (6-4) on Sunday at Levi's Stadium in Santa Clara, Calif.

Andy Dalton, the starter, took 40 snaps and completed 21 of 25 passes for 260 yards and three touchdowns, without an interception. Taysom Hill, the hammering jack-of-all trades, took the other 17 and completed one of three passes for 14 yards, and ran nine times for a team-leading 52 yards as the Saints totaled 323 yards of offense.

On each scoring drive for the Saints – three touchdowns and two field goals – each quarterback took multiple snaps as New Orleans attempted to maximize efficiency. On one, they alternated each snap and on another drive, in the third quarter, running back Alvin Kamara was added to the mix as he took a direct snap with Dalton flanked out to his right. Hill had opened that series on first down, Dalton took the snap on second down, Kamara took the next snap and then Dalton had two straight, the last one resulting in a touchdown pass to Chris Olave ...