Dallas had a lot of success with their pass rush against you last year. Is their pass rush having a good year this season?
&#8220;It&#8217;s very good. They threaten you on the edges with (DeMarcus) Ware and (Anthony) Spencer, and then inside they have some of the better pass-rushing tackles that we&#8217;ll see. When they get into some of their five-man rush, they can isolate your linemen and create problems. They do a very good job in the nickel in regards to how they pressure the quarterback. It can be a simple four-man scheme and it can come out of their 3-4 package. But it starts with the edge and like a said, I think the uniqueness is not only the outside rushers but also the inside rushers.&#8221;
Click to expand... 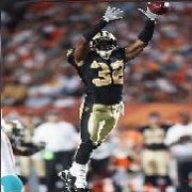 The link is messed up

Offline
The link isn't working for me...any ideas of the site, so I can read the entire article?
OP

Offline
With the way Stinchcomb is playing, after last year's game, Spencer has to be licking his chops. The Saints will have to help Bushrod on Ware with chips and a TE. No way can they afford to put in two TE's to help protect. Of course a good mix of run and pass will aid in slowing the pass rush down, but Brees will have to make some quick decisions back there because I don't think Stinchcomb is up for the task. I feel the Saints will look at last years game and focus on helping Bushrod with Ware.
Show hidden low quality content