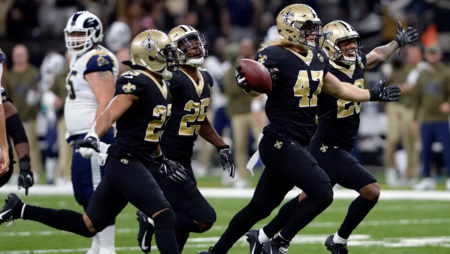 'I do think I have a lot more in my game that I haven't shown;

The known is that Alex Anzalone can do the job, and that he can do it well.

The unknown is how much, or little, the New Orleans Saints' fourth-year linebacker will be available to do it.

That's not a secret for Saints fans who saw him play in 2018, the healthiest season on his NFL resume. It's a fact that in 16 games and seven starts and "Mike" and "Will" linebacker, Anzalone was a valuable, versatile defender: 59 tackles, two sacks, six quarterback hits, three tackles for loss, an interception, three forced fumbles and two passes defensed.

But it also is a fact that he didn't play a combined 16 games in his other two seasons. He didn't register half that many – four games as a rookie in 2017 (16 tackles, a sack and a pass defensed), and two games last year (seven tackles, a sack, a tackle for loss and a quarterback hit) – before being sidelined each year with a shoulder injury.

The hope is that surgery corrected the shoulder issue. If so, the presence of Anzalone significantly will strengthen New Orleans' linebacker unit. ...