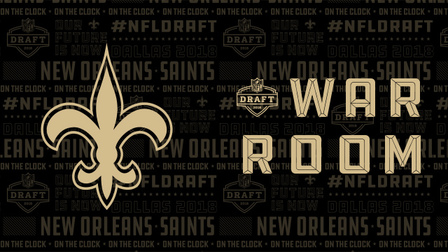 The New Orleans Saints are planning to hold their draft war room at the Dixie Brewery in New Orleans, which is also owned by team owner Gayle Benson, since the NFL forced its teams to shut down its facilities amid the coronavirus pandemic.

Head coach Sean Payton also said the team is prepared to stay at the brewery through the draft on April 23-25 if need be.

"This facility is fantastic," Payton told reporters on a conference call Wednesday, according to ESPN. "There's no one out here. We have our board set up, we've got seven monitors. ... We're certainly distanced away from each other. There's plenty of space. And then the monitors have all the scouts and everyone else, so the total people [involved] in the meeting might be 20."...

Payton said staff members are following all of the CDC guidelines. There will only be six or seven people on-site, including Payton, general manager Mickey Loomis and assistant general manager Jeff Ireland, and they will be spread out from one another in a boardroom setting. Everyone will be expected to take their temperature when they arrive at the facility.