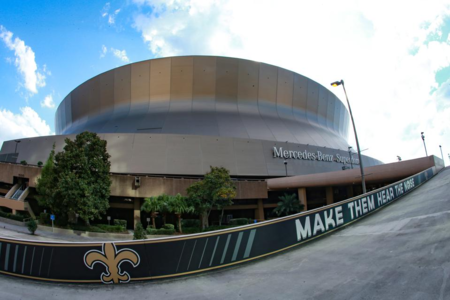 The gameplan is shaping up to score the New Orleans Saints a naming rights sponsor for the Superdome. The executive team has hired OVG Global Partnerships to lead the naming rights search just months after it was first reported that Mercedes-Benz would not be renewing as the Superdome’s title sponsor. The contract is for a 12-month term, with a hard deadline set to secure the deal before the 2021 NFL season. Dan Griffis, President of OVG Global Partnerships, will be visiting New Orleans this week to tour the world-renowned facility.

The New Orleans Saints will be guiding Griffis and his team through a Superdome in the middle of a $450 million renovation that will keep the home of the Sugar Bowl in the Super Bowl (2024) and Final Four (2022) rotation as well. Matt Webb, Saints Vice President/Corporate Partnerships, will lead the effort for the Saints.

Webb said, “The fact that the Superdome is in New Orleans plays a very positive role for any international prospects. The respect and affinity New Orleans has on the international stage as well as the major national and international interest the Superdome gets due to the events we host are pivotal when discussing with an international company. Our location also helps international brands break through the clutter that is seen in other markets like NYC or LA. Here, you’re one of one and still play on the same stage as a Madison Square Garden/Yankee Stadium or Staples Center/Dodgers Stadium. In those other markets, you’re fighting for share of mind and share of voice with many other venues.”