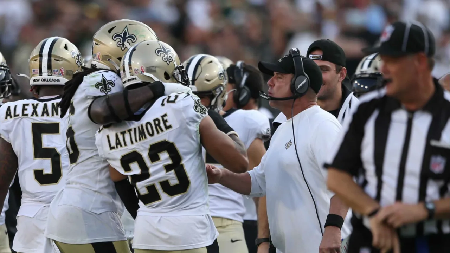 Fort Worth, Texas – All signs point to the Saints returning to New Orleans on Sept. 26, after their road game against the New England Patriots at Gillette Stadium in Foxborough, Mass.

Coach Sean Payton said Friday that the Saints' plans have solidified and the team actually will end its stay in the Dallas/Fort Worth area, where it evacuated for Hurricane Ida, on Sept. 24.

"From a scheduling standpoint, our plan is to return here (to Dallas) next week, leave early for New England and then back to New Orleans after the Patriots game," Payton said. "The New England trip is a little further, so I see ourselves leaving Friday p.m. for New England.

"We'll get a walk-through up there, play them on Sunday, and then after New England fly back in to New Orleans. That's the current plan."

The Saints' football operations has been based in Texas since Aug. 28, when the team evacuated prior to Ida's landfall in Louisiana.