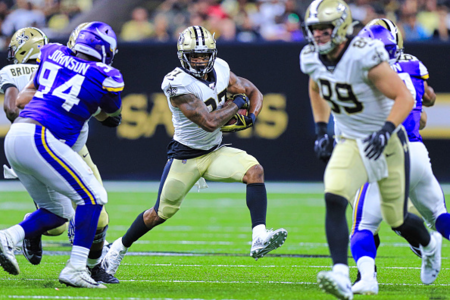 The running back competition has become a bit clearer since the previous edition of this series. Dwayne Washington, who is hoping to reprise his reserve role from last season, made a strong impression in the first preseason game. Behind a second-team offensive line Washington managed to gain 36 yards on 8 rushes, averaging a healthy 4.5 yards per carry.

Jacquizz Rodgers saw five carries and three receptions versus Minnesota after being signed only a few days earlier. While Rodgers averaged just 3.5 yards per touch, he showed potential as receiving back in the Saints offense. Unfortunately, he did drop a pass on a two-point conversion, his best opportunity of the night.

Undrafted rookie Devine Ozigbo had just four touches late in the fourth quarter, but he made the most of them. Ozigbo fought for extra yardage on a nine-yard catch and picked up 11 yards on a sweep a few plays later. He’ll have to really turn it up in the remaining exhibition games to threaten Washington’s spot. He’s certainly a strong practice squad candidate.

Washington is firmly in the lead for the third running back spot and that’s unlikely to change. If New Orleans decides to keep a fourth running back, Rodgers could be their choice. Though he can’t miss out on any more big-play opportunities.