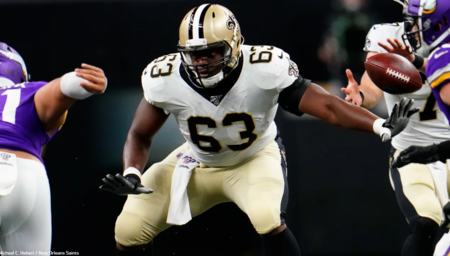 The New Orleans Saints announced today that they have re-signed guard/center Cameron Tom. The announcement was made by Saints Executive Vice President/General Manager Mickey Loomis.

Originally signed by New Orleans as an undrafted free agent out of Southern Mississippi in 2017, Tom started the season on the practice squad and then was on the 53-man roster for the last ten regular season games and both postseason contests. The Baton Rouge native appeared in 11 regular season games and both postseason contests with one start in 2018. Tom played at left guard in a come-from-behind victory at Baltimore on October 21, stepped in at center in a winning effort on December 17 at Carolina and opened the regular season finale at right guard. Tom spent the 2019 season on Injured Reserve. ...