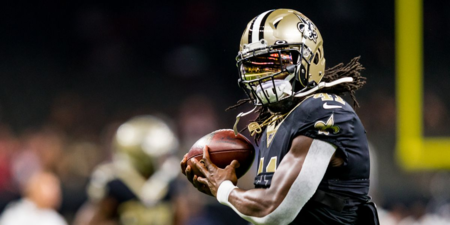 (Source: Paul Spinelli)
Kamara led the NFL with 21 touchdowns in 2020

New Orleans Saints star running back Alvin Kamara has been named one of three finalists for the FedEx Ground Player of the Year award for his performance throughout the 2020 NFL season.

Kamara led the league in scrimmage touchdowns (21) and ranked third with 1,688 scrimmage yards (932 rushing, 756 receiving). He was named the NFC Offensive Player of the Week for his record performance on Christmas Day against the Minnesota Vikings.

Kamara, 5 feet 10, 215 pounds, enjoyed a career day and performance for the ages in New Orleans' 52-33 win over the Minnesota Vikings at the Mercedes-Benz Superdome on Dec. 25, tying the NFL record for both total touchdowns and rushing touchdowns with his six scores on the ground. Kamara carried 22 times for a career-high 155 yards (7.0 avg.), adding three receptions for 17 yards for 172 total yards from scrimmage. ...