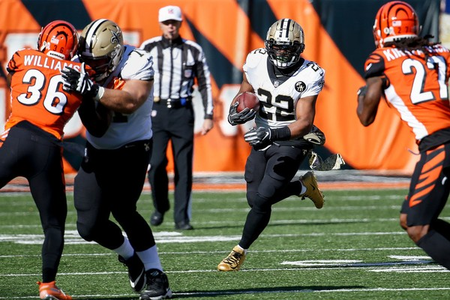 By Geoffrey C. Arnold | The Oregonian/OregonLive

Associated Press: Drew Brees threw three touchdown passes in the first half, moving ahead of Brett Favre for second place on the career list, and the New Orleans Saints rolled to their eighth straight victory Sunday, 51-14 over the Cincinnati Bengals.

Brees led the Saints to touchdowns on all five first-half possessions with a nearly perfect performance - only two incompletions. His 17-yard TD to Michael Thomas with 2 seconds left in the half gave him 509 career touchdown passes, one more than Favre.

Up next: Peyton Manning's record 539.

Brees had his way with the Bengals' historically bad defense , even diving over the pile to score a 1-yard touchdown. Cincinnati (5-4) became the first team in the Super Bowl era to give up 500 yards in three consecutive games; New Orleans finished with 509.