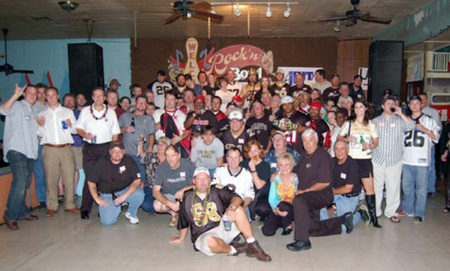 NEW ORLEANS: The inaugural season for the New Orleans Saints was 1967. Once the news was official that New Orleans was getting their own NFL team, some feared that the local area may not be able to sustain enough revenue with ticket sales. That fear was quickly dispelled once ticket sales were made public.

The Saints first home game, in Tulane Stadium (with a seating capacity of over 80,000) was sold out in less than a week.

The team’s principal owner was oil tycoon John W. Mecom Jr., who chose the official Saints’ team colors to be Black and Gold because his commodity “OIL,” was widely referred to as Black Gold. New Orleans and Gulf Coast region of New Orleans embraced the franchise and had high hopes.
Although the expansion team was very competitive, it failed to produce a winning record for the first 20 years.

The team came close achieving its first winning season after Mecom personally recruited and brought in coach Owid Allen (O.A.) “Bum” Phillips as Head Coach. Bum instilled a winning culture in the team, and also built the team to be more competitive through solid choices in the NFL draft. The team was on the cusp of a winning season AND the NFL playoffs as it entered the final week of the 1984 season.

The Saints had a lead late in the 4th quarter, but could not hold off a comeback by the Los Angeles Rams, fell short, and missed the playoffs.

Owner John Mecom was so discouraged that he opted to sell the team the following year, in 1985 after that disappointing loss....