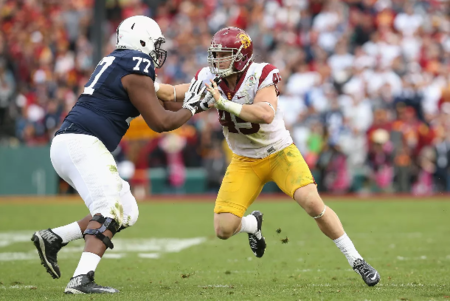 A productive college player, Porter Gustin could make 31 other NFL teams regret not drafting him.

One of the things that the New Orleans Saints are known for is having perhaps the most dominant linebacking groups in NFL history in the Dome Patrol. The intimidating foursome of Hall of Famer Rickey Jackson, should-be Hall of Famers Pat Swilling and Sam Mills, along with Vaughan Johnson terrorized NFL offenses through the mid-1980's into the 90's, and has been one of the defining marks of the New Orleans franchise. The Saints have turned out a couple of very good linebackers since the breakup of the Dome Patrol, but the unit as a whole has never matched up to their exploits. The linebacking corps was actually a major team weakness between 2014-17, providing very little pass rushing pressure, struggling in pass coverage, and being a step behind many run plays. The same could be said about the struggles that the team had at the edge position opposite All-Pro defensive end Cameron Jordan. Both of those issues were largely rectified last season. The Saints drafted end Marcus Davenport with the 14th overall selection last year, who showed the potential to be a force. New Orleans also signed linebacker Demario Davis in free agency, who combined with Alex Anzalone and A.J. Klein to give them their most athletic and disruptive linebacking unit in years. While the starters are solid at these spots, the Saints still have some question marks about depth at the positions. One solution could come from a longtime collegiate football factory, and the subject of today's undrafted rookie profile