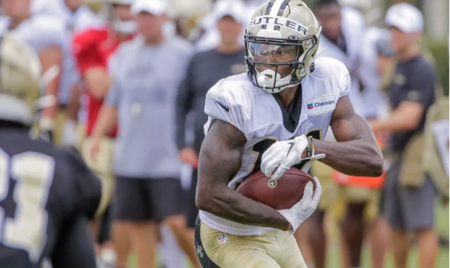 The New Orleans Saints signed Emmanuel Butler as an undrafted free agent this season. After impressing early in camp and returning from injury, Butler is eager to take the field for his NFL preseason debut.

The New Orleans Saints offense continues to impress year-in and year-out with quarterback Drew Brees at the helm. However, after a lack of depth at the wide receiver position last season, primarily due to injury, New Orleans needed to address the area in the offseason.

The team held back during free agency using their limited resources to invest in other areas of the team, including the record-breaking 5-year/$100 million contract extension for Michael Thomas. The Saints chose a quieter approach to dealing with this issue, in-house players and undrafted rookies.

Ted Ginn Jr. returns from injury and should resume his role as the number two receiver on the roster after coming just 26 yards short of 1,000 yards receiving in 2017. Second-year receiver Tre’Quan Smith has shown improvement in training camp from last season. He is expected to be a solid contributor if a connection with Brees is established. After that, those final few spots are open for competition, and an undrafted rookie free agent has his eyes set on one of those openings: Emmanuel Butler from the Northern Arizona Lumberjacks.