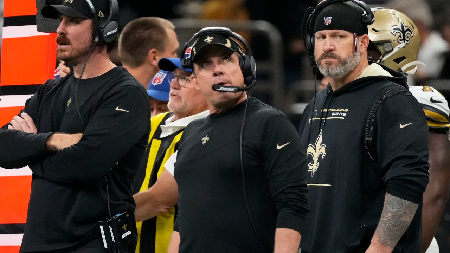 If it's not a frying pan-to-fire scenario, it's fairly close for the New Orleans Saints defense.

Two games ago, the Saints surrendered 242 rushing yards and three rushing touchdowns to Philadelphia in a 40-29 loss. Last game, on Thanksgiving night, they allowed 260 passing yards and four passing scores to Buffalo in a 31-6 loss.

On Thursday night in the Caesars Superdome, New Orleans (5-6) will face an offense that, statistically, has been better and more balanced than either of the previous two opponents.

Dallas is tied with Buffalo for second in scoring (29.6 points per game) and leads the league with 419.8 yards per game. The Saints will be looking to end a four-game losing streak, while Dallas (7-4) has lost three of its last four.

"Offensively, they've got really good balance," Saints Coach Sean Payton said. "When they run the ball for 100 yards or more, they're an unbeaten team this year."