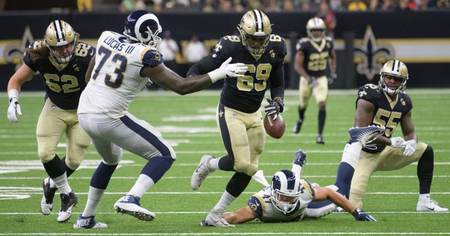 The Saints have signed Cornelius Lucas. Lucas, a former Edna Karr lineman, previously played for the Los Angeles Rams. He wore number 73 in an Aug. 30, 2018 preseason game against the Saints.
Advocate file photo by MATTHEW HINTON

Cornelius Lucas never would have even given football a chance if it wasn't for Jabbar Juluke.

Lucas signed with the New Orleans Saints on Thursday and went through his first day of practice with the team.

"It's new," Lucas said. "I've never been on the hometown team before so it's exciting."

The 6-foot-9, 330 pound Lucas was signed to replace Derek Newton, who was released by the Saints after being signed last week.

Lucas, who went to Kansas State, played for the Detroit Lions from 2014-2016 and for the Los Angeles Rams last season. He has been used primarily as a left tackle, but can also play on the right side as well.

The last time he suited up was on August 30 when he was playing with the Rams in a pre-season game against the Saints. He spent this season training in L.A. after being released by the Rams. ...