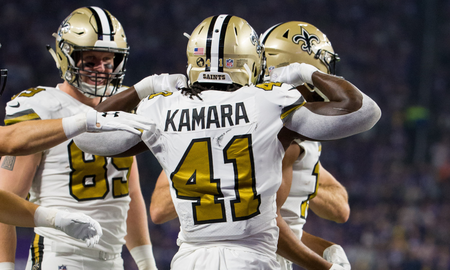 The New Orleans Saints left no doubt in their 48-7 romp over the Philadelphia Eagles, improving to 9-1 for the first time since their own 2009 Super Bowl season. Where does that leave them in the playoff standings?

Before the Saints even kicked off against the Eagles, the rest of the NFC South embarrassed itself in three separate games. The Atlanta Falcons, who the Saints will host for Thanksgiving dinner this Thursday, failed in a comeback effort against the Dallas Cowboys. The Carolina Panthers went for broke on a last-second two-point conversion and came up short to the Detroit Lions. The Tampa Bay Buccaneers are in such poor shape that Jameis Winston threw another game-losing interception and he still looks like he gives the Bucs their best chance to win. The Saints have a three-game lead on their divisional rivals, but still have four games against them left on their schedule. There’s still some work left before they can claim another NFC South title.

In the broader playoff landscape, the Saints are the NFC’s #1 seed thanks to a tiebreaker win over the Los Angeles Rams. If the Rams defeat the Kansas City Chiefs on Sunday Night Football, the Saints fall to the #2 seed. If the Chiefs win, the Saints hold onto that top spot. The #3 seed is the 7-3 Chicago Bears, and the #4 seed is 6-4 Washington, who just lost quarterback Alex Smith to a leg injury. It would take a late-season collapse by the Saints to lose their first round playoff bye. ...