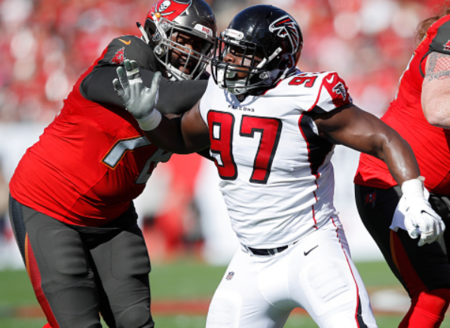 Among all the divisions in the NFL, the NFC South had the biggest transformation of their teams. Each team added key players in key positions that needed to be addressed from the previous season. These are positions that either limited teams from appearing in the NFC Playoffs or kept them from continuing their run. The New Orleans Saints were the winners of the NFC South but even they had key weaknesses on their team. This off-season, each team added high-volume offensive players to their roster. Every team in the NFC South will rely on their offensive playmakers in a highly competitive division. There will be significant weaknesses that were not resolved during the 2020 free agency or the 2020 NFL Draft that could derail their season. Here are the biggest weaknesses for all teams in the NFC South.

Much like the past numerous seasons, the lack of a significant pass rush has plagued the Falcons’ defense. Last season, the Falcons accounted for 28 sacks, which were tied for 29th in the league. Atlanta did not do much to address their pass rush especially after losing two of their top three pass rushers. Outside linebacker Vic Beasley Jr. (eight sacks) and defensive end Adrian Clayborn (four sacks) are both gone via free agency. Their top returning sackers are second-team All-Pro defensive tackle Grady Jarrett (7.5 sacks) and defensive end Takkarist McKinley (3.5).

Similar threads
A look around the NFC South on SB Nation
Cam Jordan's right about Bucs, NFC South race; five breakout DBs
Best Car dealerships on north shore the Mississippi gulf coast and south shore.
Hopes not high with the Carolina Panthers in the NFC South
Saints' Cam Jordan welcomes Tom Brady — 'the second-greatest QB of all time' — to NFC South
Saints' Cameron Jordan: Tom Brady's Buccaneers 'fighting for second place' in NFC South
A look around the NFC South on SB Nation
discounting injury and illness, which player do you think holds the biggest key to a successful season
Why the Panthers are the biggest sleeper in the NFC
N/S Derrius Guice has been released by the Washington Football Team following a domestic violence investigation
NFL.com does ceiling and floor for every team. Saints ceiling: 15-1; floor: 10-6.
2020 NFL Team Preview Series: New Orleans Saints
Saints rent hotel to create optional team bubble
[Merged] Sean Payton is creating a "sort of" bubble for the team
Saints are a top-tier team in pre-training camp NFL power rankings
Saints' team 'in good shape' after Drew Brees reconciles with teammates after protest comments
Cam Jordan: "I feel like our team is so, so close to a championship"
Share:
Facebook Twitter Reddit Pinterest Tumblr WhatsApp Email Link