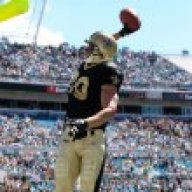 Offline
Can some recap this for me.

Offline
Q: Giants are great at DESTROYING opposing passing games... how can the Saints be any different?

A: Drew Brees is actually more effective vs. blitzes than other QB's.

A2: The 49'ers game was a "statement game" for the Falcons. They played a very COMPLETE game Off & Def ...and let the rest of the league know that they're a complete team.

A4: Michael Turner is not on the injury report. But the Falcons' fullback has been out of practice for the past couple of days. It bears watching.

Q4: Can the Panthers get back in the race?

Q4: The Panthers have a chance to "crawl" back in this. The upcoming Tampa game is winnable. And if they beat the Bills in a couple of weeks, they're back at .500 ...and once you're back to .500 near midseason, you've got a chance.

Q5: Will the Bucs give the starting job to the rookie QB?

Q5: They will do it... but not too soon. But after their bye week, you will probably see Josh Freeman as the Bucs' starter.

Offline
Q. Giants are great at DESTROYING opposing passing games... how can the Saints be any different?

A. Drew Brees is actually more effective vs. blitzes than other QBs.

That answer, while true, missing the point of the question. The Giants seem to be very effective bringing pressure with their front four, without resorting to blitzes. If they can successfully do that (ask Tom Brady after that Super Bowl) just think of how effective they can be with an occasional blitz.

I am sure the Giants plan on only occasionally blitzing. If their front four is not effective in pressuring Brees, and they have to resort to blitzing more often to create pressure, they will be in serious trouble.
Show hidden low quality content