Offline
Just wanted to take a look at the division with the Failclowns & Sucs getting Gurley & Brady in free agency. Didn’t list every single free agent since some guys are fringe guys to begin with. If I missed anyone feel free to correct me.


Free agents:
S Vonn Bell - would like to see him back, but with the signing of Jenkins and the rookie play of CGJ this may not be in the cards
QB - Taysom Hill
WR Tedd Ginn Jr
WR Austin Carr
FB Zach Line - retired
S/ST - JT Gray - hopefully we get him back
CB PJ Williams - hopefully we can get him back cheap
G/C Cameron Tom - hopefully we can get him back due to his versatility on the O line.
RB Dewayne Washington- wouldn’t mind him coming back unless we can find a better 3rd RB
T Patrick Omameh
LB Manti Te’o
LB Stephone Anthony
S DJ Swearinger
CB Johnson Bademosi
DE Noah Spence
LB Josh Martin
LB Colton Jumper

Online
Thanks for compiling this. Very helpful. 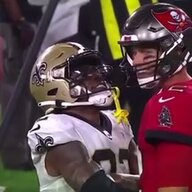 Offline
This division got much much better. There isn't anyway around it. Clowns are making big moves adding Fowler as an edge rusher, Gurley as a RB. Bucs now have good coaching and good QB play which was never the case in the past. Brady throwing to Evans hmmm. The Jenkins signing makes more sense as we need a QB of the secondary in a big way.
Watch Carolinas's defense be far less clueless with a guy in house who was starter of our offense for about a third of the year lol.
Show hidden low quality content

The Saints are just one game out of first place in the NFC South!
2 3 4