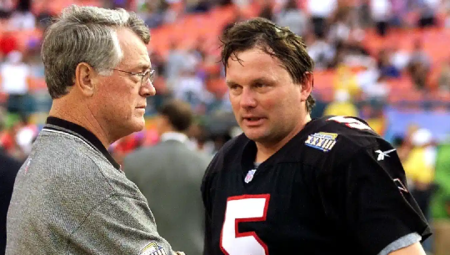 Morten Andersen, also known as the “Great Dane”, is one of three kickers to have left behind a legacy in the NFL and inducted into the Hall of Fame.

The Great Dane was raised in Denmark where he was a gymnast, a long jumper, and a soccer player. The NFL was never in the back of his mind like most kids who end up in the league.

Morten visited America in 1977 where he kicked his first American football and received a lot of attention. He played one season in high school and that’s all it took for Michigan State to offer him a free ride.

Andersen’s NFL career began in 1982 when the Saints drafted him up in the fourth round. It’s abnormal to be drafted as a kicker in the first seven rounds so clearly, he was special.

Morten spent a total of 13 seasons in New Orleans and eight seasons as a rival on the Atlanta Falcons. He was and still is the all-time leading kicker for both teams. Morten shared with Heavy.com which team he enjoyed playing for the most.