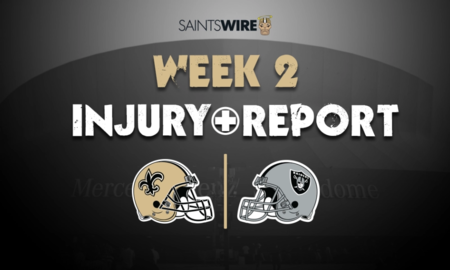 The jury is still out on whether New Orleans Saints fans will see wide receiver Michael Thomas battle through an ankle injury to suit up in Week 2 against the Las Vegas Raiders, but the team released updates on practice participation for several players on Friday.

Chief among them is wideout Emmanuel Sanders, who is expected to step into the WR1 role for New Orleans while Thomas is sidelined. Sanders was given a day of veteran’s rest during Thursday’s practice before returning for a full day’s work, and he’s on track to see a lot of targets in Monday’s kickoff.

Additionally, things are progressing well for rookie guard/center Cesar Ruiz. The team’s first-round draft pick went down with his own ankle injury late in training camp, but he practiced again on Friday. If he can turn in a full session on Saturday, he should be able to make his debut at right guard (where backup Nick Easton filled in for Week 1).