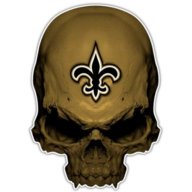 Online
Eli and Luck are retired, is that "dead" money? 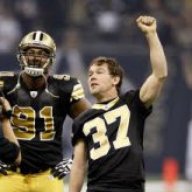 No2DC said:
Eli and Luck are retired, is that "dead" money?
Click to expand...

Also some players are not with the team listed, such as Philips Rivers

Offline
1st RB on the list at #69 Zeke Elliot. Shows how the NFL has evolved from workhorse RB’s

FYI you missed Goff who is tied with Rodgers for #3. 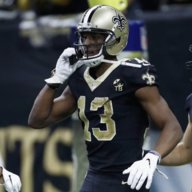 Offline
Does Dak count with his $31.4 franchise tender ?

Offline
At least Drew isnt 16th on the this list.

Loose Cannon said:
FYI you missed Goff who is tied with Rodgers for #3.
Click to expand...

It doesn't seem as if "accuracy" has much to do with this list! Not only in this list but The List itself seems to be BS to me. YES! I AM biased and NO , there is NO QB who "should" be making MORE than Our OWN #9 but again, I AM very biased and would only allow Tom Brady to make more than Drew given that , IMHO, Brady was born with a horseshoe up his rectum but the guy can put the ball in playmakers hands and I do wish Drew would throw his guys open so they could do MORE after the catch and allow their talents to really roll but hey! What more do we really need? Also, $25 vs $35 Mil?? After $10 Mil? Who's counting? But that's The Chalmette in me since to me? It just becomes a lot of money vs a lot more money and I'd be happy with half of ANY of it, but that's me and all I really need is for my wife to be happy, my kids safe and healthy and $10 mil rolling in on a regular basis and I'm GOOD Ya''ll! But I'm no NFL QB who must have others negotiate for me and then pay all of the "hangers on" who surround me and ALL looking for more for themselves. I realize that's used for write off of taxes and necessary when the Money is that high but still. I'd rather make that kind of bread being a Vet and saving some child's puppy or something like that. So different does as different is, I suppose? Just get me close to around $10 Mil per year for about 15 years and I won't make a peep about anything except what I do now and THAT is to complain about TAXES and where that money goes! Seems THAT will never change, does it? I didn't think so! Stay Funky, Frosty , Safe , Healthy and Happy! Cheers to The WHODAT Nation as The NFL has lost a lot of it's luster for me lately. How about you all? Feeling any different about The League and then having to explain everything about "the taking a knee business"? I'd much prefer some other form of protest which doesn't need to be explained away or disrespects our Military ! I realize now that that's NOT what their point is but in the beginning and really that entire first year I didn't know it wasn't against America so I got hot about it. Anyway, I'm way off point here so I'll drop it. I also think no one should host our fanbase all together as like usual since that's too many Cajuns to go down with this Flu ! The WHODAT NATION can NOT sustain such a massive hit the likes of some massive outbreak and putting so many of our WHODAT NATIONALS on sick leave! No WAY! The Yuckaneers, Dirty Birds and Panites? No problem! Our WHODAT Community? NO WAY!

Hard to laugh at that when he beat the Saints in the playoffs.

livefromDC said:
Hard to laugh at that when he beat the Saints in the playoffs.
Click to expand...

Actually it’s hilarious that he is taking up so much of their salary cap and it’s completely irrelevant that he was quarterbacking the Vikings team that beat us. It’s a bit of a stretch to claim that “he” beat the Saints in that game.

Offline
D Carr better step up his game. Especially at his salary & not to mention the Raiders hadn't had a winning record since 2016.

livefromDC said:
Hard to laugh at that when he beat the Saints in the playoffs.
Click to expand...

But then didn't put up much of a fight the following week against a 49ers team that once again had to cheap-shot their way to beating us.

Similar threads
n/s Pat McAfee got PAID (also made Wilbon look even more like a complete fool)
Ranking the NFL's best wide receivers: Execs, players, coaches debate the top 10
Former Saints safety Usama Young now helps NFL players prepare for life after football
Players irate as NFL wants 35% of salaries in escrow
Report: NFL proposed a potential 35% pay cut for players to offset losses from coronavirus pandemic. CGM Already Responds
NFL Players will get an opt-out option for 2020.
Southwest Division roundtable: Players to watch in Orlando
CSC Slack: Top Five Most-Hated Players from the Division in the Payton-Brees Era
How the pandemic affects the players, and why that matters
NFL players raise concerns about safety of their workplace
Boomer Esiason suggests college football players are getting coronavirus on purpose
Alvin Gentry on his players: ‘They stood by me. I want to do the same for them’
Share:
Facebook Twitter Reddit Pinterest Tumblr WhatsApp Email Link