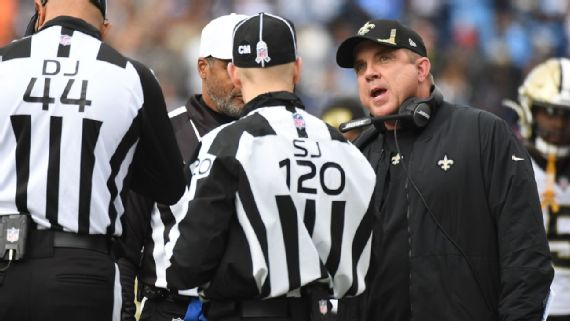 METAIRIE, La. – On Jan. 20, 2019, the New Orleans Saints fell victim to perhaps the most infamous no-call in NFL history, when officials missed a blatant pass interference penalty against the Los Angeles Rams in the NFC Championship Game that likely would have sent New Orleans to the Super Bowl.

But that season was just the beginning of a bizarre trend that has continued to plague the Saints.

Since 2018, the Saints have finished 30th, 31st, 32nd and tied for 31st in penalties called against their opponents (both accepted and declined).

No other NFL team has finished that low in even three consecutive years since 2001, according to ESPN Stats and Information research. The Elias Sports Bureau can go back further using data on accepted penalties only. According to Elias, the last team to finish in the bottom three of opponents’ accepted penalties for four straight years was the Green Bay Packers (1970-73).

Saints officials declined to comment on the trend, but sources have indicated that the team is aware and disturbed by it. ...