NOLA.com First-and-10: Which Saints players should be considered the team's biggest stars? (1 Viewer) 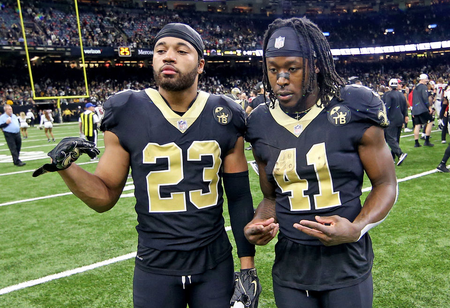 As I walked my dog on Thursday morning, I saw a New Orleans Saints shirt that grabbed my attention in the window of Pop City on Magazine Street.

It was a shirt that featured something looking like the Presidential seal, but the words going around the circle were Brees, Kamara, Jordan and Thomas, each separated by a fleur-de-lis, similar to the old Ramones shirts.

I’d seen this shirt before, as well as others like it. But just a couple days before, I was thinking about how I might rank the players on the Saints roster after the season. It’s harder than it might seem, at least near the top.

The reason this shirt struck me was because I seriously wonder why that’s the group of four. Really, my biggest question is why Marshon Lattimore is not included. Couldn’t the font have been a bit smaller to include five names?

If I were Lattimore, that shirt would irk me just a little bit, even though those other four players are so important to the Saints. ...