NYT: It's official: Clinton Plans to Press for Florida and Michigan delegates (1 Viewer)

Offline
Wow! Hillary is now on the record stating she plans to push to have these delegates seated.

There is a battle raging over whether to seat the Michigan and Florida delegates because those states violated party rules in moving up their primaries. Mrs. Clinton told Texas Monthly that she agreed only not to campaign in those states, not to oppose seating their delegates.

“We do not want to be disenfranchising Michigan and Florida,” she said. “We have to try to carry both those states.”
Click to expand...

Offline
For the first time in my adult life, I'm really looking forward to watching the Democratic Convention.
OP

Offline
Here's a direct link to the Texas Monthly interview and a quote from Clinton in that story:

I signed an agreement not to campaign in Michigan and Florida. Now, the DNC made the determination that they would not seat the delegates, but I was not party to that. I think it’s important for the DNC to ask itself, Is this really in the best interest of our eventual nominee? We do not want to be disenfranchising Michigan and Florida. We have to try to carry both of those states. I’d love to carry Texas, but it’s usually not in the electoral calculation for the Democratic nominee. Florida and Michigan are. Therefore, the people of those two states disregarded adamantly the DNC’s decision that they would not seat the delegates. They came out and voted. If they had been influenced by the DNC, despite the fact that there was very little campaigning, if any, they would have stayed home. But they wanted their voices heard. More than 2 million people came out. I mean, it was record turnout for a primary. Florida, in particular, is sensitive to being disenfranchised because of what happened to them in the last elections. I have said that I would ask my delegates to vote to seat.
Click to expand...

Online
The more Hillary Clinton talks about changing the rules of the game, the more people are reminded of her husband's regime. It's really amazing watching her campaign snatch defeat from the jaws of victory again and again and again. Every time I start to get worried about her coming back, she or her surrogates kick the ball into her own net. It's like they said, "What can we do to make sure Obama wins Texas and Ohio? I know, let's talk about fighting for the delegates from Florida and Michigan."

Offline
It all depends on what the meaning of the word "is," is.

Offline
Does she have any toes left to shoot?

Did everyone see this?

Nearly $100,000 went for party platters and groceries before the Iowa caucuses, even though the partying mood evaporated quickly. Rooms at the Bellagio luxury hotel in Las Vegas consumed more than $25,000; the Four Seasons, another $5,000. And top consultants collected about $5 million in January, a month of crucial expenses and tough fund-raising.

Senator Hillary Rodham Clinton's latest campaign finance report, published Wednesday night, appeared even to her most stalwart supporters and donors to be a road map of her political and management failings. Several of them, echoing political analysts, expressed concerns that Mrs. Clinton's spending priorities amounted to costly errors in judgment that have hamstrung her competitiveness against Senator Barack Obama of Illinois.
Click to expand...

But yet she's the one with all the experience and qualification to run the country? The funny thing is that now you hear Clinton-camp people saying "yeah, well we were outspent in Wisconsin."

Let's be real. Some of us are hoping to see: 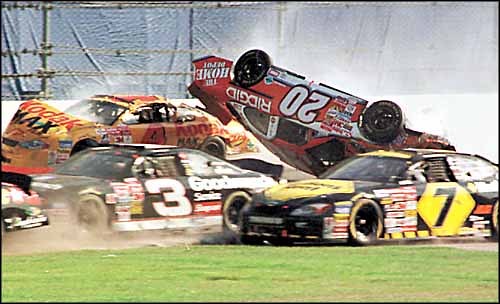 Did everyone see this?

But yet she's the one with all the experience and qualification to run the country? The funny thing is that now you hear Clinton-camp people saying "yeah, well we were outspent in Wisconsin."

She went her through her money too quickly because, pre Iowa, she was treating the nomination process like a coronation. She quite simply didn't think she would need the money later.

On another note, and I don't have a link, but I remember reading a couple of weeks ago that Hillary is facing trouble on another front because her supporters already have, for the most part, donated the maximum amount that individuals can for the primary process and thus can't contribute any more while Obama's supporters haven't so, in addition to having more supporters, those supporters can keep sending in checks.

I can't believe she would be dumb enough to demand that Florida's and Michigan's delegates get seated and counted for her. She has to realize that even though it's not going to work out for her this time around, she's still in prime position to take a shot in 4 or 8 years (depending on whether Obama wins or loses in the general election).

The mistakes her campaign have made have been numerous. If nothing else, it will all be preserved for posterity in the case studies at the JFK School of Government and all of the top business schools.

Well, unfortunately for the GOPers who are desperately wanting to see the party fracture happen, the only way it gets that far is if Hillary can get some wins before the convention. Talking about the Florida and Michigan delegates while other races are still in play does nothing for her. It just moves the undecideds in Texas and Ohio into the Obama camp. All she seems intent on at this point is making sure that the Florida and Michigan delegates won't matter in any event which is fine with me, of course. I'm just really surprised at the inept campaign she's run this year.

Pure Energy said:
Let's be real. Some of us are hoping to see:

As Mr. Sparkle said, this will be the first time most of us will get to see an honest to goodness "old school" nominating convention. It will be historic.

As Mr. Sparkle said, this will be the first time most of us will get to see an honest to goodness "old school" nominating convention. It will be historic.
Click to expand...