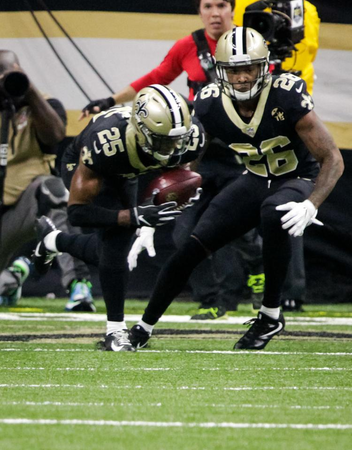 But after three straight games with a high-octane offense, scoring at least 45 points each against the Rams, Bengals and Eagles, the New Orleans Saints offense finally looked a bit … human.

Thursday night, during the Saints' 31-17 win in the Mercedes-Benz Superdome, it looked for a good while as though someone — the Atlanta Falcons, maybe? — had sabotaged the Saints’ gas tank. Drew Brees actually threw an interception (gasp!) for just the second time this entire season. The Falcons, the despised Falcons, dared to tug on Superman’s cape.

Eventually, though, order was restored. While all of Saints fandom may have exchanged worried glances at the great man hanging one up there for the wrong team, Brees was soon back at his tailor-like precision needle-threading, spreading around touchdown passes to receivers who could be the modern-day answer to the old Miami Dolphins’ No Name Defense. ...