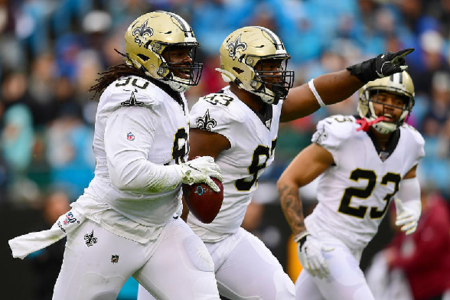 With the new NFL league year set to begin March 18th, I'll be looking at every division in the league and giving you one free agent that would make sense for the New Orleans Saints to pursue.

As it stands right now the Saints have an estimated amount of cap space of 12,302,100 according to Spotrac.

Today we talk about the NFC South.

We all know the Saints need a complementary wide receiver to go along with Michael Thomas and there are a ton of options in this upcoming NFL Draft at WR. Say New Orleans doesn't go with a receiver in the draft, maybe the one they wanted wasn't there when they were drafting or maybe they draft one and want additional options? Either way, when I look at the Bucs the big-name free agent that jumps off the page at me is receiver Breshard Perriman. Perriman is 26 years old and has bounced around a couple of teams since he's been drafted in 2015. Things didn't work out with the Baltimore Ravens (where he was drafted), same with the Cleveland Browns, and he seemingly found something in the Tampa Bay offense last season. Now, he was surrounded by great talent with Mike Evans and Chris Godwin but when both of those guys got hurt late in the season Perriman got some opportunities and took advantage. Overall, he finished 2019 with a career year of 36 catches for 645 yards and six touchdowns. Last season he made four million dollars so the Saints should be able to bring him in for around the same money.