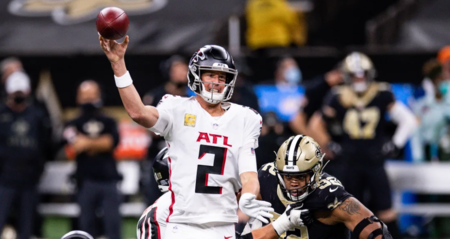 Falcons fans (most of them, anyway) are feeling good following Atlanta's dominant win over the Raiders. The team is 4-2 since Raheem Morris took over on Oct. 12, but a huge test against the Saints is looming. Only nine days ago, New Orleans thumped the Falcons 24-9. It's a critical test not only for the Falcons players, but for Morris and this coaching staff, too. In the meantime, fans have plenty of questions and comments about where the team is at and what the future may hold, so let's get to some of those now. Just remember that all opinions here are mine unless noted otherwise.

Do the Falcons have the staff, or could they hire a staff to groom a QB such as Sam Darnold if the Falcons made a trade for the QB?

Matt: Sam Darnold? Well, the Falcons certainly have a staff that's capable of working with a quarterback like Darnold, but the Jets quarterback is in the third year of his fully guaranteed four-year contract (with a fifth-year option available). Let's forget Darnold and the Jets situation here for a minute. The Falcons have a quarterback in Matt Ryan, and it's not a position of weakness or need right now. This team has greater needs and bigger issues at other positions. The Falcons are also in the midst of searching for a new general manager, a person who will come in with a fresh vision and build this team – specifically, its roster – accordingly. ...