Panthers' D steps up, but offense misses too many opportunities vs. Saints (1 Viewer) 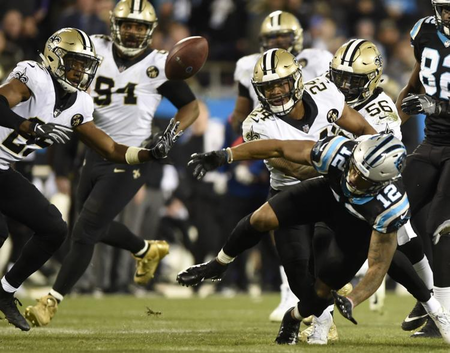 By Herb White | Special to The Advocate

Carolina, playing to stay relevant in the NFC playoff race, managed to keep the New Orleans Saints bottled up for three quarters but couldn’t force them off the field in a 12-9 loss Monday at Bank of America Stadium. For a team that’s been looking for any sign of life in a five-game losing streak, the Panthers came up with their best defensive effort since limiting Philadelphia to 17 points in an Oct. 21 win. But the Saints took over in the fourth, chewing clock while pulling ahead early in the fourth and draining the clock to earn their fourth straight win against Carolina, including the postseason.

Through three quarters, Carolina gave the Saints all they could handle, forcing them to settle for a pair of Wil Lutz field goals to grab a 7-6 halftime advantage. Carolina’s defense, which has been unable to make key stops during a five-game losing streak that resulted in the demotion of defensive coordinator Eric Washington and the firing of a pair of assistant coaches, turned back the clock. They made Drew Brees uncomfortable in the pocket, and perhaps more important, contested the Saints receivers. Brees connected on 23 of 35 attempts for 203 yards, but outside a 28-yarder to Benjamin Watson, the Panthers didn’t allow explosive plays to hurt them. ...