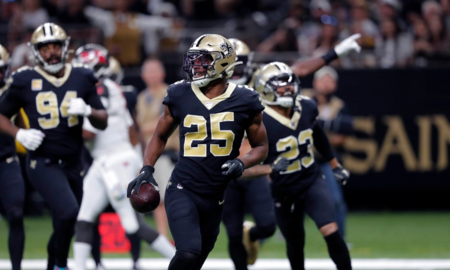 One former member of the New Orleans Saints is looking for a new team. The Carolina Panthers announced Tuesday that they are releasing cornerback Eli Apple, who signed with them as a free agent this summer. If he joins a new squad, it will be his fourth team in three years after the Saints acquired him in a midseason trade with the New York Giants back in 2018.

Apple coincidentally took his first defensive snaps with the Panthers against his old squad, totaling four tackles on 28 reps versus the Saints. Pro Football Focus dinged him with three completions allowed on three passes into his coverage, giving up two catches to Deonte Harris (for 25 yards) and another reception to Marquez Callaway (for 7 yards, converting a first down).

A lingering hamstring injury had kept Apple off the field throughout Carolina’s training camp and the opening weeks of the season; his only action before Week 7’s Saints-Panthers game came on a handful of special teams snaps. ...