Offline
Just listened to Payton on Sirius on his regular Monday morning spot.

He said that he was pleased with the team and the effort this week.

They asked Payton about SF and he said that they are a good team, Nolan has them going to right way and that it's going to be tough game. He said he was looking forward to getting back into the Dome and playing better in front of the hometown crowd. He said they want to give something to the home fans to cheer about since they laid two eggs in the last two games at home.

Bob Papa then asked Payton about New Orleans since he was in town to do the Bayou Classic for NBC. Payton echoed what Papa said about the city still having a long way to go.

Gil Brandt talked to Payton a while about Dallas, and Tony Romo.

It was then revealed that the Saints tried to trade for Tony Romo in the offseason, and that WeatherNLU is a bumbling moron for not having known this information already. Payton specifically called me out and told me I needed to do a better job of weeding through the information out there.

Anyway, they talked about how before Brees came into the picture, Payton wanted the guy he groomed from day one in the NFL. He went on to say how proud he was of Tony and that he worked very hard to get to where he is. He joked that Jerry (Jones that is) wanted the second overall pick, so Payton passed.

Payton was then asked about injuries. Simoneau broke a bone in his hand but Payton doesn't think it's serious and he'll be able to play with a cast or a splint. Also, he said Colston was ready to go, taped up, cleats on and all and ran some routes in the pre-game. Payton said de-activating him was simply a deal in which Payton just felt that if they could hold him out one more game he would be closer to 100% and take less of a risk of losing him for the season by re-aggravating the injury.

Offline
This was reported a few weeks ago.
OP
OP

David Robbins said:
This was reported a few weeks ago.
Click to expand...

I assume you are speaking of the Romo info, and thanks I didn't realize that. It was the first I heard of it. However, that's not what the thread is about. The interesting info is also the info on Colston and Simoneau.....neither of which I had heard either. Which means either I am stupid, or there is still something to be gained by reading my original post.

Offline
simoneau and colston were news to me. thanks nlu.

Offline
Sorry Weather, I didn't read the last paragraph. Thanx for the news.

Offline
Thanks WeatherNLU! I had not heard about Simoneau's injury and wondered what the deal with Colston was. Good news that he should be ready to have a solid game next week against the 9ers as we will need him.

Offline
The Romo bit is news to me. Makes sense, Payton groomed Romo. As good as Romo is playing though i'm glad we got Brees. Really glad.

Good call on Colston (since we won Glad to hear he'll be in the dome, we'll need him down the stretch as close to 100% as possible.

Not too worried about Simoneau, linebackers usually don't struggle to bad to play through those sorts of injuries 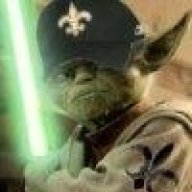 Offline
Yep! Glad he held Colston out. I was starting to worry that he might slump a little at the end of a long rookie season after all the touches he's been getting. I think a couple weeks rest will help Colston surge down the stretch (not that he was having any trouble before the injury).

Offline
The way Payton described it, it was a "boxer's break" on the "second finger from the left". (he didn't specify which hand, though...I'd assume it was his left)

And I'd underscore what NLU reported about Jones wanting too much for Romo, and add to what LSS stated in saying that I'm much happier w/ Brees and Reggie than I would have been with Romo.

Offline
Wow, that Romo stuff is news to me. Maybe since Payton knows him so well we'll be able to exploit his weakness'.

Offline
One point to add, Payton mentioned that last week he "didn't feel comfortable" throwing the ball as much as we did but as the game was going they felt they had to go to the air. Maybe that's also old news but I hadn't heard it and know that many on the board were upset with the lack of running downs in the game last week.

It speaks volumes that the top two QBs our team made moves to get were Drew Brees and Tony Romo. Somehow, I feel like we're finally in good hands.

Another good Monday morning Payton segment. It was cool of Papa to raise the point about New Orleans still very much a city in recovery mode.

Offline
I really need to get Sirius radio. Sounds great.


It was then revealed that the Saints tried to trade for Tony Romo in the offseason, and that WeatherNLU is a bumbling moron for not having known this information already. Payton specifically called me out and told me I needed to do a better job of weeding through the information out there.

did he really call you a bumbling moron, cause if he did, that is just comical!

Offline
Thanks for the post. I totally missed the call in today. BDM

Offline
You can get the online subscription and not have to buy all of the hardware/accessories. It's the same price ($12.95).
Show hidden low quality content

Payton Turner Could be Elite
2 3