Offline
Coach Payton just said he expects to have Mike Bell ready for the Giants game. He said it on the coaches show on WWL, so sorry for not having a link.

We are allowing the opposing O to convert on 26% of their 3rd down plays compared to 40% last year.

Waiting on a league response as to why the ball was spotted where it was after the penalty, on the punt play when we almost blocked the punt. Some confusion as to where the penalty was actually flagged. That was a 35 yard penalty.

Gave props to Morestead and the defense.

Will work on some new things during the bye week to improve punt returns.

All in all very happy to be 4-0, gave credit to the Jets for being physical, happy we matched their toughness, still a long season ahead, getting ready for the Giants, etc......

Sorry for being all over the place / the recap. Trying to listen & recall at the sametime.

Offline
Thanks for the recap. Lance Moore will improve punt returns even if he never gains a yard. He actually understands the concept of a "fair catch."

Cuozzo67 said:
Thanks for the recap. Lance Moore will improve punt returns even if he never gains a yard. He actually understands the concept of a "fair catch."
Click to expand... 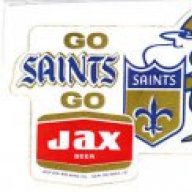 Offline
A great point he made was that everyone seems to be so caught up in the turnovers the D is producing that folks are overlooking the fact they aren't giving up Big Plays on Defense. We seem to be able to thwart opposing O's big play ability. Sweet!

Online
anyone else click on retthib's posts just to see his avatar? i'm just saying.


So you're satisfied with Reggie's production and decisions on punt returns?
Show hidden low quality content

Payton Turner and others not at practice today.
2

Could you see Sean Payton bringing back Ed Orgeron as assistant?
2 3 4 5 6