Pete Prisco is in town y'all (1 Viewer)

Offline
<blockquote class="twitter-tweet"><p>I bet the bars in New Orleans that say they wouldn't serve Goodell would slobber over him if he actually walked into their place</p>&mdash; Pete Prisco (@PriscoCBS) <a href="https://twitter.com/PriscoCBS/status/296033494642069504">January 28, 2013</a></blockquote>
<script async src="//platform.twitter.com/widgets.js" charset="utf-8"></script>

Offline
Basking in the clowns championship season no doubt...

Offline
Nahhhh....that's your job Pete and you're really good at it. 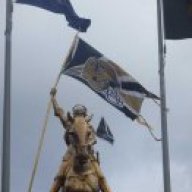 Fontenot said:
Nahhhh....that's your job Pete and you're really good at it.
Click to expand...

Offline
Prisco...King...Duncan...Goodell are all dead to me, whatever comes out of their mouths
is either self serving or pandering, no need to bother.

Offline
It's obvious Prisco knows nothing about the people of New Orleans..

Offline
Pete and CBS in general can eat my posterior.

Sent from my SAMSUNG-SGH-I727 using Tapatalk 2

Offline
Invite him out for a drink then, Pete. You'll be guilty by association.

Online
What a troll.

Offline
Don't feed the troll. Unless the food is poisoned, help him to seconds

Offline
If Prisco walked into a bar, no one would even notice him.