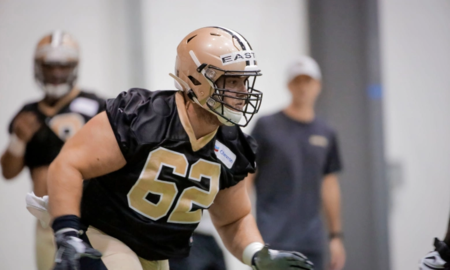 The Tampa Bay Buccaneers boasted the NFL’s best run defense, but it didn’t matter against a New Orleans Saints offensive line that bullied them on Sunday. It’s not uncommon to see the Saints’ big blockers doing damage up front — four of the unit’s five starters were recognized at last year’s Pro Bowl or on the All-Pro lists. But what’s unexpected is how well the unit’s newest addition performed.

According to snap-by-snap charting from Pro Football Focus, backup left guard Nick Easton was the best Saints player on offense. Their grading system credited him with an 83.5 overall mark (third-best in the league this week, going into Monday Night Football) and a no-hitter in pass protection, with 37 snaps logged against the Buccaneers pass rush but no quarterback pressures allowed. Easton’s aggressiveness on run plays was a big part of New Orleans’ success, with the veteran often moving the man across from him before advancing to the second level.