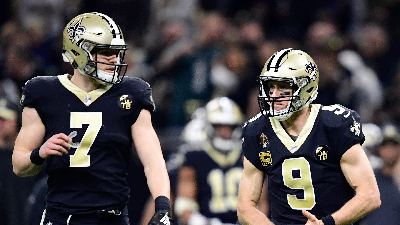 "I thought he played great," Brees said about Hill, "I thought he managed everything about this week, about the preparation and then obviously, the way he played today, I thought it was magnificent. I felt like he was great in and out of the huddle. All-in-all, I felt like our offense had great tempo and great rhythm, and obviously, that starts at the quarterback position."

Hill, in his fourth season out of BYU, completed 18 of 23 passes for 233 yards and rushed 10 times for 51 yards and two touchdowns in the Saints' 24-9 victory over the Atlanta Falcons. It was his first NFL start at quarterback and he led the Saints (8-2) to their seventh consecutive victory.