Offline
As a friend of Pierre's I have been reading this board for about a year now, ever since PT was picked up by the Saints. I have seen a lot of questions or comments about "I wish PT could beef up and be a larger back somewhere around 220." "I wish PT were built like Deuce" Etc. etc. I just wanted to make this known...

Around the times of the NFL combine Pierre was lifting hard and was weighing in at 215 and even peeked at one point at 218. He has the frame and ability to put on more weight. Before training camp started last year, the Saints give a target weight for each player that they would like him to be at. Pierre's target number from the Saints was 210. When you report for camp, you are weighed and every pound you are over your target rate you are fined something like 400-500 bucks a pound. Not a big deal for smaller guys who flucuate a pound or two, but you can see how this affects lineman that come in out of shape.

This is the weight that the Saints feel Pierre can be most affective at, at least for this past season. The ability is there to gain weight but I'm sure he is going by what the organization is telling him to weigh in at.

Offline
Welcome and thanks for the input. If they see him as a real contributor now, they may want a few more pounds on him. Pierre has so much upside.

Offline
I think he showed in the Chicago game that he doesn't need to do a thing about his weight.

Offline
Thanks for the welcomes. This is a great board, very active and there are some knowledgeable people on here with a lot of passion. I have a lot of respect for that.

Although I am a little biased (and also still scratching my head as how the Bears did not pick up the local kid with the Offensive Coordinator that recruited him out of high school), let me say you guys have a great player.

Guys I watched almost every one of Pierre's high school/college games. The kid can play. Just because he wasn't an acclaimed college running back, don't let everything ride on that. He was in a tough situation. Without being too negative about Illinois, the kid ran behind some bad, bad offensive lines and only had a decent passing game his Freshmen year. Teams knew Illinois was going to run the ball, and the reason that Pierre did what he did is that the kid is a tackle-breaking machine. He is one of the hardest to tackle college running backs I have EVER seen. The first guy hardly ever brings him down, and an arm tackle just won't cut it against him. It seems to be a similar trend in the NFL. He doesn't have breakaway burner speed, but I can tell this year that he looks a half a step faster than he did at Illinois. He no longer wears a large ankle brace/tape that he wore at Illinois, and possibly his upgrade in speed is attributed to that. Strong, powerful legs that keep churning for extra yards, and good hands catching the ball out of the backfield.

I hope that next year Sean Payton realizes what he has in #23, and calls his number an appropriate number of times. With Bush being used correctly, PT, Steck, and a possibly healthy Deuce the Saints have a lot of dimensions to their offense that will keep defensive coordinators up late at night.

Offline
Welcome to SaintsReport. PT had such a wonderful game against Chicago. I really look forward to his contributions next year. I'll definitely try to grab an autograph at T/C next summer.

Online
How many turnovers did PT have at Illinois IlliniFan? His not turning the ball over so far has been the thing that has most impressed me thus far with all the pounding he takes.

Offline
Well that answers the questions about Will Smith and Charles Grant getting fat.

Offline
Hi IlliniFan23,
I'm from Louisiana and just started teaching at the University of Illinois in Champaign. A great college, and did you know that Ron Zook was def. coordinator for the Saints at one time?
For some odd reason there are a lot of ties between the Uni. and LA sports.
Pierre Thomas is one breath of air that we definitely needed and are grateful for. 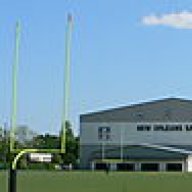 They all asked for you

Weight is not an issue with your pal. I liked how PT played in the pre-season and I loved how he ran in Week 17. He does not go down and so many other things about him are right. We really need to keep #23 on the roster.

IlliniFan23 said:
the kid is a tackle-breaking machine. He is one of the hardest to tackle college running backs I have EVER seen. The first guy hardly ever brings him down, and an arm tackle just won't cut it against him.
Click to expand...

That just about says it all. The fact that he should only get better and stronger when it comes to breaking tackles is amazing. I wouldn't want to see him put on more pounds. Maybe he should work on improving his speed and agility though.

Something in me wishes Pierre would get an oppurtunity elsewhere because he will never get the oppurtunity he deserves as long as he is with the Saints. The best he can hope for here is taking over at Deuces role when he leaves.
Last edited: Jan 10, 2008

Online
Thanx for the info bro... and welcome.

I'm glad you stopped in with this info because I get so sick and tired of people sayingthat "this guy" needs to gain weight... ever since Haslett made Deuce put on weight he's had one injury after another... and every time I hear somebody say that a player needs to put on weight I think of how Deuce used to rip off 30 and 40-yard runs at will.. and how we'll never see it again because some dumb coach thought it would be a good idea for a player to get bigger.

I hope PT (and Reggie for that matter) stay at his current weight because I think he's effective where he's at.

Offline
I really hope Pierre doesn't bulk up, he definitely proved he doesn't have to against chicago.

Offline
Don't fix what aint broke, he is running just fine, send him to a speed coach maybe, but he has awesome balance and the ability to shed tacklers, got to love that.

Offline
The Saints likely wanted PT at 210 because they saw his primary responsibility as a special teams player. Now that he's shown he can play the position in a real game, they might like for him to gain a few pounds, but he's still going to primarily be a ST guy as long as Deuce and Stecker are under contract with this team.